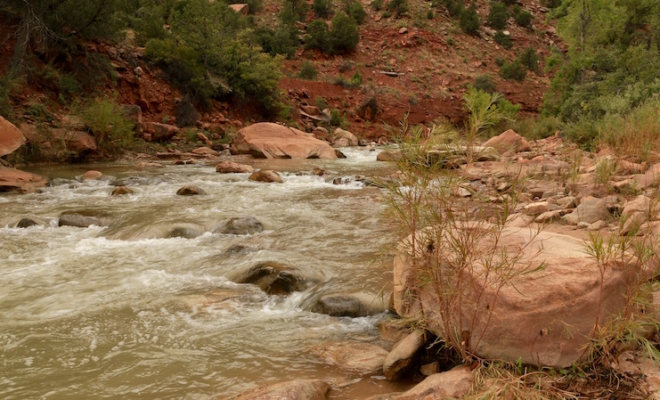 Swimming Against the Current

Have you ever heard the line of advice that tells you to go with the flow? It says that if you stop fighting the current things will get much easier for you. It might use the metaphor of a fish gently swimming downstream, moving without having to exert itself much and still getting where it needs to go.

Let’s continue with the fish metaphor. If spawning salmon followed this advice their species would go extinct. They have an arduous journey back upstream, fighting against difficult odds to follow what they know they need to do at the deepest level of their beings. Other marine animals effortlessly ride huge ocean currents to travel long distances across the world. These animals also are following the deepest yearnings of their beings. They are doing what is right for them without having to question it.

Humans have the innate capacity to know what is best for us and the conditions that are necessary for our spiritual growth and self-actualization too but we have to work harder to figure it out. One of the challenges to individual growth in our schizoid society is that moving away from group consensus is scary.

We have spoken a lot about existential anxiety. One of the ways that it manifests itself in our individualistic, technological, isolated world is that the thought of being cast out by the culture or group to which you belong, isolated from human warmth and human connection, is terrifying because there are so few other forms of community to fall back on in our society. I definitely recommend using the explosion of meetup groups to pursue a new interest and meet new people. You might like adding another social structure to feel more connected and give you a different viewpoint of the world.

The pull to conform with the groups we are associated with makes a lot of sense in our society. But while doing so lowers existential anxiety in the short-term, the long-term effect is a constant flitting at the edge of consciousness reminding you that you are not following your path or becoming the person you know yourself to be. I heard a quote recently that says “Enlightenment is the journey of yourself, through yourself, to yourself.”  We can equate self-actualization with enlightenment and see that the path is the same. You have the capacity to recognize the seeds of who you are and the ability to give them the nurturing they need to grow.

Here is a take on existential growth by Frederick Nietzsche. “We can act as the gardeners of our impulses, and-which few people know-we may cultivate the seeds of anger, pity, vanity, or excessive brooding, and make these things fecund and productive, just as we can train a beautiful plant to grow along a trellis wall…we may let nature take its own course, only trimming and embellishing a little here and there; and finally, without any knowledge or consideration, we may even allow plants to spring up in accordance with their own natural growth and limitations, and fight out their battle among themselves,-nay, we can even take delight in such chaos, though we may possibly have a hard time with it! All this is at our option: but how many know that it is? ”
(Nietzsche, The Dawn of Day, Pos 4687 Kindle)

If you were a fish in nature you would know intrinsically whether it were in your best interest to fight against the current or to go with the flow, and in fact you wouldn’t even have much choice in the matter. You would have to follow your biological inclinations. Your behavior would perfectly match the fullest expression of who and what you are. You would be self-actualized.

Bringing unconscious phenomena into conscious awareness and recognizing the rationalizations you make for your behavior is important if you want to know whether you are acting out of your being’s desire for growth or for some other reason. Sometimes going with the flow matches perfectly with your needs, and when this happens it’s a great ride. Sometimes doing so lolls you into inactivity and keeps you from activating your potential. Swimming against the current of popular opinion can seem like too much work, but going along with it often means swimming against your own current, and this is ultimately far more difficult to bear.