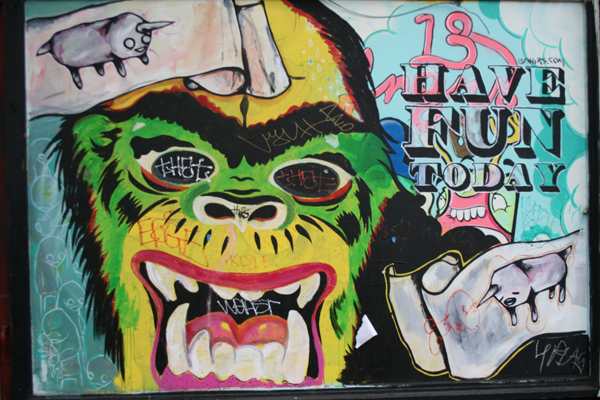 By Michael Schreiner | November 1, 2012
I dislike the term ‘predator’ to describe a person who rapes or kills innocent victims. Predators in the wild are not evil. They follow their genetic programming and do what their instincts tell them to do. They are not self-conscious like humans; they can’t think about thinking or conceptualize their behavior. They help keep balance in the ecosystem and do not derive perverse pleasure from their actions.Also predators in the wild are respected by humans. They are at the top of the food chain and have the power to exert their will over the environment. They are graceful. Why should we use the same word to describe an act of cowardice? Any one of us could buy a gun and open fire, or prey upon innocent victims, or commit any atrocity within our human limitations. But we don’t, and in a sense using the word ‘predator’ glorifies those who do.

I prefer ‘The Lost’. This term more accurately describes a person who decides upon a course of decay rather than growth, on damaging those around him rather than helping them to flourish. In these people the most noble human qualities have been stunted or retarded. If you are considering a course of action that will harm another human being physically or emotionally you are lost.

Of course being lost implies the possibility of being found. Since we are endowed with the ability to think about our choices we are different from every other species on the planet. You can decide against a behavior even if unconscious forces are telling you at full strength to perform it. And when you think about it, a true act of courage is to choose the noble path against your motivations. If you are thinking about harming an innocent victim, refraining will be your legacy and your greatest act of power even if no one ever knows it or recognizes it as such. All the great spiritual teachers show us that it is never too late to be saved, and salvation starts with right action. You have the power to act, and the power not to act.

There is one useful component to the use of the term ‘predator’ that I considered while watching a nature program. It showed a huge colony of seals and the playful, innocent young pups interacting with each other on the shoreline. Many of them frolicked in the water and were quickly eaten by killer whales lying in wait for them. Soon the rest of the baby seals learned to stay away from the deeper water and to always be careful while playing. They lost their innocence but saved their lives.

We hate to rob the innocence of children, or of anyone for that matter. On an unconscious level we entertain the fiction that nothing bad could happen to our loved ones. But you are not doing your children any favors by keeping them blind to the reality of evil in the world. By keeping them innocent you are making them into the unsuspecting seals who venture out into the ocean to be devoured.

You’ve got to have the courage to talk to your kids about the reality of the world and the steps they can take to protect themselves, and it is never too early to do so. Until we live in a world of peace and brotherly love there is no use in pretending or acting otherwise. You can couch your conversation in the idea of choice. You don’t have to tell your kids that the world is an evil place, but instead that some people choose evil actions. This will automatically make them start thinking about the importance of doing good to counteract it.

I once read that when good people do nothing evil wins. I love this idea because it reminds us that being good is not enough to combat evil acts. We have to act. Some obvious things to remember to tell your kids are to never get into a car with a stranger, to never venture into an isolated area without other people, to scream at the top of their lungs for help if they are being accosted or are fearful of being accosted, and to understand that any sexual advances that come from an adult are evil and wrong. If an adult tells them not to tell a secret they should tell it to the world.

This conversation destroys a child’s innocence, and this is of course a tragedy. But innocence is not necessarily a good thing, especially in a world that is far from innocent. We don’t want to scare children into a state of constant anxiety, but instead make them aware of the realities of the world so that they they can take the necessary steps to protect themselves and live happy lives. If we have to use the term ‘predator’, let’s make the prey much more difficult to capture.