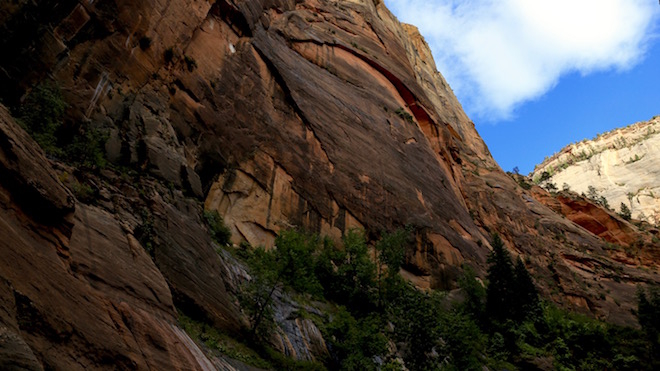 The movie ‘God Bless America’ is a good format to discuss psychological principles of repression, rationalization, externalization, and the atrocities that are sometimes committed when people do not have the courage to honestly confront their existential crises.

In the movie we meet Frank, an insurance salesman who has grown increasingly dissatisfied with popular culture in America. He flips through the channels on his television in apparent disgust, watching reality stars making fools of themselves, political commentators spewing out ideological garbage, and families who appear to care more about possessions than they do about each other. He lives next door to a couple that is constantly fighting. They have a baby who never stops screaming. He fantasizes about opening fire on them and killing the entire family. He is disgusted by his coworkers as well, and has a fantasy later where he murders them in the office.

The most pertinent psychological observation is that Frank feels impotent. We are not referring to the sexual sphere, but instead to his feelings of insignificance and powerlessness. Frank does not feel that he can effect change, nor does he have the courage to stand up for himself during times of conflict. He hates hearing his neighbors fight but never goes next door to complain. He supposedly hates popular culture yet spends all his free time passively flipping through the channels.

He is divorced from his wife and has a daughter he wants to spend more time with. She is not excited about coming to visit him, and he does little to stand up for his rights or make it happen. He hears her complaining in the background,  and it’s obvious he makes the connection between her whining about a cell phone and a reality t.v. star whining that she did not get the car she wanted from her parents. Instead of conveying his thoughts he silently blames popular culture for what it is doing to his family. He is unceremoniously fired from work for having sent flowers to a coworker who was feeling sick. He does not stand up for himself or fight back, instead passively accepting the decision even though he has worked at the company for eleven years. The final straw comes when he discovers that he has an inoperable tumor in his brain and that he is going to die. Here we have a portrait of a person who feels impotent in every way. He cannot even fight back against his impending death.

The act of watching television is itself a passive process, and Frank does a great deal of it. People who mindlessly watch t.v., flipping through the channels for something good to watch, expect to be entertained without having to do anything. They get to sit back on their couches and passively allow a stream of pointless programming to enter their brains without critical analysis or active engagement. Frank is vocal about how much he hates popular culture, but the amount of time he spends consuming it points to the same passivity in his leisure time that defines every other aspect of his life.

Frank is in existential crisis yet is not really consciously aware of it. He does not feel significant, lacks the courage to look at his own passivity as a major cause of his problems, and no longer believes he can effect change in his life. This is a state of nihilism, an existential vacuum that increasing numbers of young Americans are feeling as the promises of happiness and meaning turn out to be nothing more than shams. Frank represses all of these feelings because of what they would tell him about himself and because they are painful and anxiety inducing. Whatever we repress, we tend to show in equal and opposite force to the world. That’s why the politicians who are most vocally against gay marriage are always the ones caught in bathroom stalls having sex with another man.

The more a person represses feelings of impotence, insignificance, and powerlessness the more likely he or she is to commit acts of violence. Violence is the fastest way to bridge the chasm between you and your environment because it proves beyond the shadow of a doubt that you exist, that you are significant, and that you have power over another person.

Frank first considers suicide, but then decides to go on a rampage instead, killing reality stars, television personalities, and other people who he deems unworthy of living. His main justification is that they ‘are not nice.’ Consider the hypocrisy of a person who rationalizes his evil actions on the grounds that others are not nice. This is a commonality amongst people who become sadists. They rationalize destructive actions by externalizing their bad qualities onto other people or institutions. He says comments like ‘I only want to kill people who deserve to die,’ ‘No one can take personal responsibility for anything anymore,’ ‘Nobody cares that they damage other people,’ and ‘America has become a cruel and vicious place.’ What a hypocrite. All of these externalized statements actually describe him, and they come from a lack of courage to honestly face his own repressed feeling of impotence.

Let’s consider his comments from the previous paragraph and put them back onto Frank where they belong . ‘I only want to kill people who deserve to die.’ He feels that he deserves to die. After all, he puts a gun in his mouth several times during the movie and almost pulls the trigger. ‘No one can take personal responsibility for anything anymore.’ He takes no personal responsibility over his murder spree, instead blaming others for not being nice or for doing, saying, or thinking the wrong things. ‘Nobody cares that they damage other people.’ He does more damage than anyone he punishes, killing countless people and leaving their families to deal with the tragedy. ‘America has become a cruel and vicious place.’ How does making fun of a guy who sings poorly on American Superstars, one of his examples of the viciousness he is talking about, come even close to massacring victims who have no chance to defend themselves or fight back? His acts are the definition of cruelty and viciousness.

I hate that this movie tries to make us empathize with Frank. His commentary on popular American culture might be spot on, but he uses it as a rationalization for his own destructiveness. Frank is a coward, like all people who seek to solve their existential crises through intimidation and violence. If you don’t like the programming on t.v. stop watching. If you don’t like the way our culture is headed do something constructive to change its course instead of adding to its problems. There is another way to fight internal feelings of impotence, prove you exist, and effect change in the world, and this is through creative activity, positive human connection, and love.