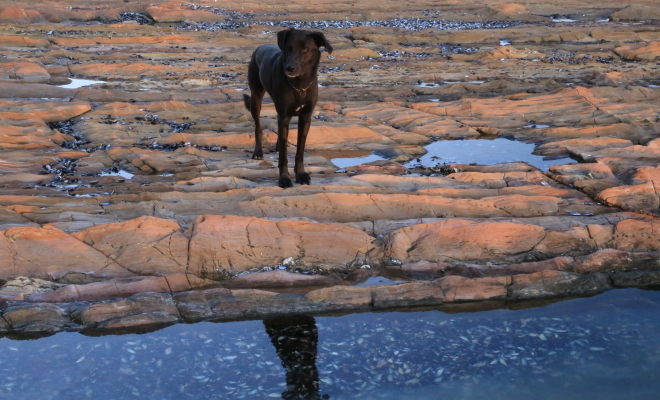 Let’s say that you’re training a puppy and you use corporal punishment to try to elicit behaviors. Quite apart from any moral or ethical objections to this training method, what you’re doing is setting the bar very, very high for what the puppy will interpret as an adequate reinforcement to elicit the desired response.

A stare will not do, a frown will not do, a chastising word will not do, yelling will rarely do unless the perceived threat of physical punishment is behind it. By frequently recurring to physical punishment you’re basically eliminating any and all other forms of reinforcement from your training repertoire. Therefore in a sense your puppy is also training you. You come to feel almost irresistibly compelled to use corporal punishment even when you don’t want to since nothing less seems to work for eliciting the behavior you’re after. A vicious cycle.

It’s always unfortunate when trainers of any kind, parents, teachers, pet owners, etc., throw up their hands in frustration, saying to themselves and others “This organism is out of control. I give up.” It’s usually not really the organism’s fault. That organism has simply learned to respond to a given intensity level of reinforcement.

It is possible to reset the level, to establish a less intense negative reinforcement to elicit the same behavior, but there is always an interim period that requires a lot of patience on the part of the trainer while the organism adjusts to the new level of reinforcement.

If someone has a dog who is ‘out of control’, asks me to help train it, and expects a total shift during the first training session they’re going to be sorely disappointed. They’ll leave the session assured in their false belief that the dog really is out of control, that nothing else but corporal punishment will do to get the desired behavior, that the dog is basically a lost cause.

When you’re adjusting the contingencies of reinforcement, bringing negative reinforcements down to more suitable levels where there won’t be any negative psychological or emotional affects on the organism like always happens when corporal punishment is used, you can expect some confusion on the part of the organism and you can expect to feel frustrated and powerless for a while.

And when a much lower level of reinforcement, like a frown, elicits the same behavior as a spanking used to, you leave yourself with options, with a lot more ammo to use in the special cases where you really need to elicit a response but the organism isn’t listening. If a frown for some reason doesn’t work, you can take it up a notch to a strong command, and the upgraded intensity will almost surely motivate behavior since it signals a noticeable change in the environment. When you set the contingencies of reinforcement at low levels of intensity you’re leaving yourself a lot of space to work. When you set the contingencies of reinforcement at high levels of intensity you’re leaving yourself no space to work, you almost always have to recur to that high level just to get to the baseline behavior.

In the vast majority of cases it’s not the organism that’s out of control, it’s the contingencies of reinforcement that are out of control. If you take the time to understand the basics of behavioral psychology, consciously set up a schedule of reinforcement, and then consistently stick to this schedule, you’ll start getting the results you want and the organism you’re training will become a lot happier and healthier in the process.