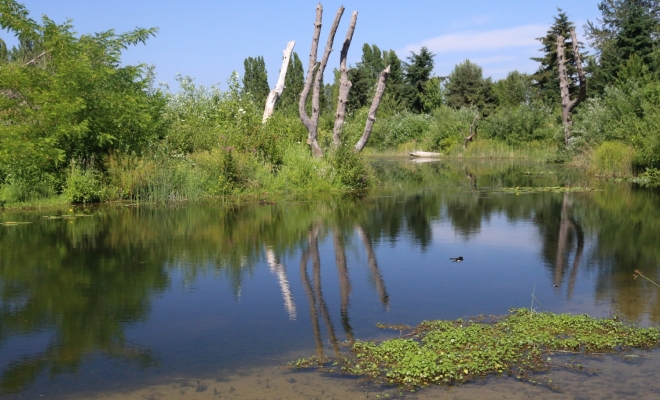 A story about the Buddha is a good starting point to sharply contrast the solution that many take in individualistic societies to lower the anxiety stemming from feeling alone and powerless.

A group of people approached the Buddha and asked him,

This simple story has profound ramifications for the purpose of religion and our personal relationship to it. In the Buddhist tradition enlightenment is achieved by a man who is no different from you or me, and it follows that any one of us can achieve this higher state of consciousness using our own human powers. The Buddha is not a God to be worshiped but instead an example to apply to our lives. What is necessary is the symbolic act of waking up from slumber. The parallel in Western psychology is bringing unconscious drives and motivations into conscious awareness, shrinking the territory known as the id and enlarging the territory known as the ego.

A religion that does not rely on a stronger, all knowing, powerful presence that bestows grace upon those who are faithful enough to merit the gift seems quite foreign to our Western culture entrenched in Christianity. Yet we will show how the act of handing over power to a stronger presence, humbling oneself before it, is done to avoid personal responsibility and lower anxiety. It is an outcome of our individualistic culture and the solution is not limited to religion but occurs in a wide array of settings. The psychological term is masochism. When most people hear this word their thoughts automatically lead to sexual perversion, but actually the masochistic attitude is a psychic state that manifests itself in many ways, the sexual encounter being just one of them.

At its core the masochistic relationship is a solution taken to lower the anxiety stemming from aloneness, which is accomplished by merging with a stronger presence. You are engulfed by this stronger presence and your identity becomes inseparable from it. Above we spoke of religion but the same mechanisms operate in patriotism, fanaticism, symbiotic attachment to parents or romantic partners, racism, majority opinion, or allegiance to some other cause or organization. You give up who and what you are and instead identify with the more powerful presence, in the process finding relief from burdensome feelings of individual responsibility and from the secret terror of being completely and utterly alone.

Supposed safety and peace are found in solidarity with the group, but in this process of identification individuality is lost. Opinions are no longer your own but instead those of the larger structure. You become nothing and only have relevance inasmuch as what you are attached to has relevance. No wonder fanatics fight so bitterly and unrelentingly for their cause. If the cause were to die they would symbolically die.

Here is a metaphor to help describe what we are talking about. Imagine that your psychic energy is a full tank of gasoline. In actuality you could be any car in the world, but when you look in the mirror what you see is a broken down jalopy. There is a battalion of large Sherman tanks nearby sparkling in the sunlight, and all the commanders ask is that you donate your gasoline to the cause. You agree and believe you have become part of something bigger and wonderful. But you have lost yourself. You are swallowed up and the car that you could have been cannot run because there is no gasoline for it. You are no longer behind the steering wheel. Those in command of the tanks decide upon the route and destination, and you simply go along for the ride.

We fight so hard in the West to protect our individualism, but when confronted with the stark reality of what it means to be truly alone and responsible for the direction of our lives anxiety spikes to unbearable levels. We find ourselves running for cover and attaching to any structure that promises to lower it by making the difficult decisions for us.

The lowering of anxiety that merging with a stronger presence offers comes at a terrible price. Your life ceases to be your own. The more you worship something bigger than yourself the smaller you become. You attribute your talents, abilities, and potential to something outside of you. Rather than developing your own human powers and growing into the full version of yourself you stunt your growth and become a cog in someone else’s machine.

By confronting the painful anxiety that is the outcome of a culture that places the highest value on the separate individual, and by coming to terms with the ways that you flee from having to be solely responsible for your life, you have a better chance to become the person you know you are deep down.